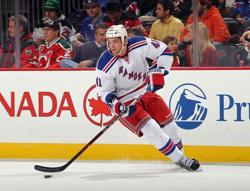 The well-traveled Stu Bickel has found a home with the New York Rangers.

And yes, you can ask him about it.

Had his hockey playing life taken any other direction, the conversation might be one that Bickel avoids.

But this summer, in the wake of signing a two-year contract extension to play for the New York Rangers, the topic was one he welcomed.

“I came painfully close,” recalled Bickel. “I played in two section finals, and we lost both. It was tough back then, but the experiences from those games, and the friendships I still have from those teams make it much easier to look back on.”

The recollection also rekindled what, up until he signed his two-year deal this past July, had been a whirlwind tour of locker rooms over the course of the last decade.

Bickell skated at Minnetonka High School as both a sophomore and junior, before transferring to Eden Prairie his senior season.

The move gave him the distinction of being one of just a handful of players to ever play in – and lose – consecutive section championship games for two different teams. It also kick-started a series of stops that had him wear 14 different sweaters since making the move from Minnetonka to Eden Prairie prior to the 2004-05 season.

Bickel spent his senior season playing high school hockey at Eden Prairie, but sandwiched the year around a 13-game, before-and-after stop in Green Bay of the United States Hockey League.

He would begin his first post-high school season back in Green Bay, but eventually wound up playing most of that year with the now defunct Southern Minnesota Express of the North America Hockey League.

He played 38 games for the Express that year, and used the season to both refresh his passion for the game, and to find a home on the ice that would one day lead to the opportunity to call Madison Square Garden him home rink.

“I ended up switching back to defense when I was with Southern Minnesota, and that was huge for me,” said Bickel. “I really hadn’t played a lot of defense up until that point, but when I did go back there, I realized that was where my talents were.”

Others took notice as well.

Bickel played his way back into the USHL the following year, and after dressing for 57 games with the Sioux Falls Stampede, the University of Minnesota extended an offer to skate with the Gophers.

Bickel took it, spending the 2007-08 season at the U, where he surprised many by playing in 45 games before leaving after the season to begin his criss-cross tour of the country in the professional ranks.

His first stop came with the Iowa Chops of the American Hockey League. He would co on to play for the Bakersfield Condors of the East Coast Hockey League, the San Antonia Rampage (AHL), the Syracuse Crunch (AHL), the Elmira Jackals (ECHL), the Hartford Wolf Pack (AHL) and then finally the Connecticut Whale (AHL) before being called up the Rangers in December of 2011.

“When that call came, it was a huge sense of accomplishment,” said Bickel. “I felt like I got there the hard way, and after going through everything I went through in the years leading up to that point, I wouldn’t have it any other way.”

His first professional game was Dec. 20 in a game at Madison Square Garden against the rival New Jersey Devils. By the time it was over, he had his first National Hockey League point; an assist on a shorthanded goal by Carl Hagelin that put the Rangers up 3-1 in a game they would go on to win 4-1.

Bickell would play 50 more regular season games with the Rangers, and then 18 during New York’s run into the Eastern Conference Finals.

“There were a lot of moments I will never forget about that season, but my first game is probably the one that sticks out the most,” Bickel said. “To play my first NHL game in front of the Rangers fans at the Garden; I don’t know if it gets much better than that.”

About the only way to top it, Bickel concluded, was to skate the Garden ice with the Stanley Cup high above his shoulders.

The two-year contract he signed last July could provide that opportunity, and for a kid that has bounced around plenty since he last played on the high school stage in Minnesota, it would be a fitting end to a quest gone good.

“I remember way back in high school thinking about what it would be like to break into the NHL,’ Bickel said. “Like every hockey player from Minnesota, it was always my dream. Now that I’ve done that, and proved I belong, my focus isn’t on my accomplishments. I still need to get better so I can be the best player I can be. I’ve come a long ways, but I’m not there yet.”