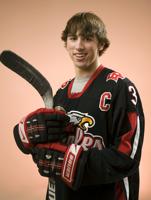 Nick Leddy, an Eden Prairie native, has added his name to the greatest trophy in all of sports, the Stanley Cup.  Leddy and the Chicago Blackhawks captured the Stanley Cup in dramatic fashion, scoring two goals in a span of 17 seconds with under two minutes left in the game for a 3-2 victory.

Leddy has been on an incredible ride to the top of the hockey world, going from community based hockey in Minnesota to Stanley Cup Champion by age 22.

A talented young defenseman from early on with the Eden Prairie Hockey Association, Leddy has been drawing accolades here in Minnesota for quite some time. He participated in the Minnesota Hockey High Performance Programs (formerly Advanced Programs) as a 15, 16 and 17 year old.  Two of those years he was selected represent Minnesota at the USA National Development Camp.

Leddy was actually offered a spot with the USNTDP in Ann Arbor, MI in 2008, but he chose to return to his high school team and play out his senior season.  The following spring that decision paid off as Leddy helped his hometown Eden Prairie Eagles capture their first Minnesota State High School Hockey AA Championship. He also received a host of individual awards including All-State Tournament team, First Team All-State, Star Tribune’s Metro Player of the Year and the prestigious Mr. Hockey Award.

The University of Minnesota Golden Gophers welcomed Leddy to the tradition of maroon and gold for the 2009-10 season. Despite missing several games early in the year with a broken jaw, Leddy finished with 11 points in 30 games and was named the team’s Rookie of the Year.  That ended up being his only season with the Gophers as he signed with Chicago Blackhawks that summer.

Over the past three seasons, Leddy has become a fixture in the Blackhawks’ lineup playing 176 games in three seasons and every regular season game over the past two.  He has quickly become one of the most talented young defenseman in the NHL and now finds himself a Stanley Cup Champion.

This week's Drill of the Week, presented by @coachthem, comes from Hermantown High School coach @pandrews2211, who… https://t.co/aA1OAOM8D1

Congratulations to Grand Rapids’ Alex Goligoski on his 1000th NHL game! From his youth and high school days, throug… https://t.co/0wrpQSFmDV

RT @WildGivesBack: It's the last game of the homestand! Help support our partners @MinnHockey when you purchase a raffle ticket tonight at…

Do you know a coach who strives to win while also pursuing the important goal of teaching life lessons through spor… https://t.co/WqclNV4TRK