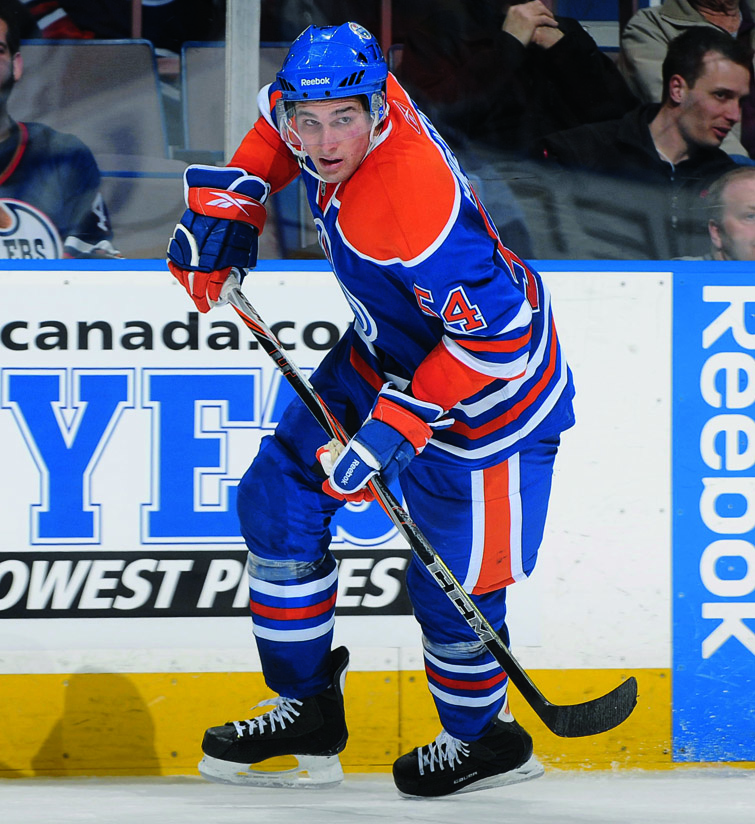 Chris VandeVelde of Moorhead had played 28 games for the Edmonton Oilers entering this season.

Practicing against Chris VandeVelde was tough.

VandeVelde wasn't necessarily a big guy, but he was thick and protected the puck well, even back in high school. And the physicality –  also a defensive end for the Moorhead football team, VandeVelde wouldn't let you hit him without returning some punishment.

“He was one of the rare guys, when you went to go and hit him ... he'd almost step into you to hit you back,” said his hockey head coach at Moorhead, Dave Morinville, who left that position in 2012. “He was a hard guy to practice against, I'll tell you that, because he didn't back down. We had some real battles in practice.”

His teammates had the privilege (or arguably, the punishment) of going against him. Brett Barta, a defenseman on those Spuds teams, remembers that they “probably went a little too hard” during practices. So going up against the physical VandeVelde and his 6-foot-2, 200-pound frame?

“It wasn't fun. It wasn't fun at all,” Barta said. “A lot of forwards, you can push their hips and they'll move. Chris didn't move. He doesn't stay super low, but he stays low enough where he has that center of gravity. Kind of like T.J. Oshie ... Chris had that same exact ability, where the balance was so strong that his puck protection was extremely tough to go at. And then of course the skill after he gets by you. It wasn't very fun to be around.”

But it was never just about doling out punishment, or making those other guys pay. That brand of hockey created opportunities on the ice that VandeVelde was able to take advantage of.

“If someone was coming to hit me ... I'd try to lessen the blow [to myself], try to put a shoulder into them, that's for sure,” he said. “If you can ... kind of surprise someone and make them fall, then still have the puck, that's huge. And it definitely gives you some time and space.”

He used that added time and space to his and the team's benefit. After playing sporadically as a sophomore, VandeVelde put up 114 points in his next two years of varsity action, including a 35-goal, 32-assist senior campaign in 2004-05. That season netted him a Mr. Hockey finalist nod, plus an Associated Press All-State second-team selection. And even more importantly for a tight-knit Spuds group, a second consecutive trip to the Class 2A state championship game.

It started when VandeVelde was a junior on a squad that Morinville called, “a real special group of guys that got along really well.” The entire team would work out, hang out, and eat out together – not split into smaller cliques, which is normally the case.

“It's kind of unparalleled, to be honest with you,” said Barta of the team's closeness. “It's just a group that everyone seemed to enjoy being around each other. We all had one goal and that was to win a state title, and that was it. The competition level was high, and we all respected each other.”

That year ended in disappointment – a 1-0 loss to Centennial in the Class 2A title game, dealing the Spuds a second-place finish and settling their final record at 26-3-0.

“[VandeVelde] was a force for us that year,” Morinville said. “We didn't back away from anybody, and I think that's a lot of the reason a lot of our guys would stick around. They all had the opportunity to go and play juniors, and they all decided to stay ... and play high school hockey, play for their hometown.”

VandeVelde was one of “a bunch” of players, as he put it, that turned down an opportunity to lace up for another league or team.

“We were a tight-knit group, and everyone wanted to come back and play for Moorhead,” he said. We had great fans, and it was just fun hanging out at the rink every day. I wouldn't pass that up for anything.”

That would turn out to be a good decision.

VandeVelde was named team MVP as senior, and was both an all-state and all-tournament selection. He put up 77 points that season, as the Spuds once again took the Section 8AA crown with a 23-2-2 record. Wins over Rochester Century and Duluth East (“Chris had a dominating game his senior year against Duluth East in the semifinals. He was just unbelievable that game,” Morinville remembers) put them in the title game against Holy Angels.

The Spuds were right there, so close to the goal that they all came back to achieve. They put four goals on the board, but it wasn't enough. Holy Angels plowed ahead to win 6-4.

“I was heartbroken,” VandeVelde said. “Growing up with these guys, it feels like yesterday it just happened. You grow up your whole life playing in the Moorhead hockey system and working hard and pushing each other. We knew, or I guess I knew, that was kind of our last shot, and it definitely stung. It's just something that you take with you, I guess, and bring it to the next level.”

Would he trade it for anything?

“Like I said, it happened,” he said. “But yeah, I would love to go back and play that game again. I think a lot of guys would. But we can't, so it is what it is.”

Later that summer, VandeVelde was drafted in the fourth round of the 2005 NHL Entry Draft by the Edmonton Oilers, 97th overall. He spent the next season with the Lincoln Stars of the USHL before moving to the University of North Dakota, where he put up 52 goals and 65 assists in 166 games for the Fighting Sioux. Since graduating in 2010, he's split time between the AHL's Oklahoma City Barons, and the Edmonton Oilers, playing a total of 28 games on the NHL level so far. He signed with the Adirondack Phantoms of the AHL this fall.

He's rounded out his game since leaving the Spuds, he said, mainly trying to improve on the defensive end.

“In high school and going into college, you really don't realize how good you have to be defensively, or the different roles you can take being a professional,” he said. “If it's penalty kill or taking draws, just stopping and starting ... it's a big part of the game. It's a big thing, and you will get noticed by doing it.”

Morinville remembers him as exactly that: Someone you could trust, a lead-by-example player who not only performed well himself but made the team around him better.

“You could put him out there in any situation. Power play, penalty kill, he could do everything,” Morinville said. “He was just a great all-around player. Some guys that are very, very good offensively, you kind of worry about putting them out on the ice in critical situations at the end of the game. You never had to worry about him.

"He was great to coach, but he understood the game. OK, I'm going out there, I want to make sure I don't hurt my team. A lot of times people think about individual stuff more than team stuff, and that was not Chris.”

Just don't get in his way during practice. 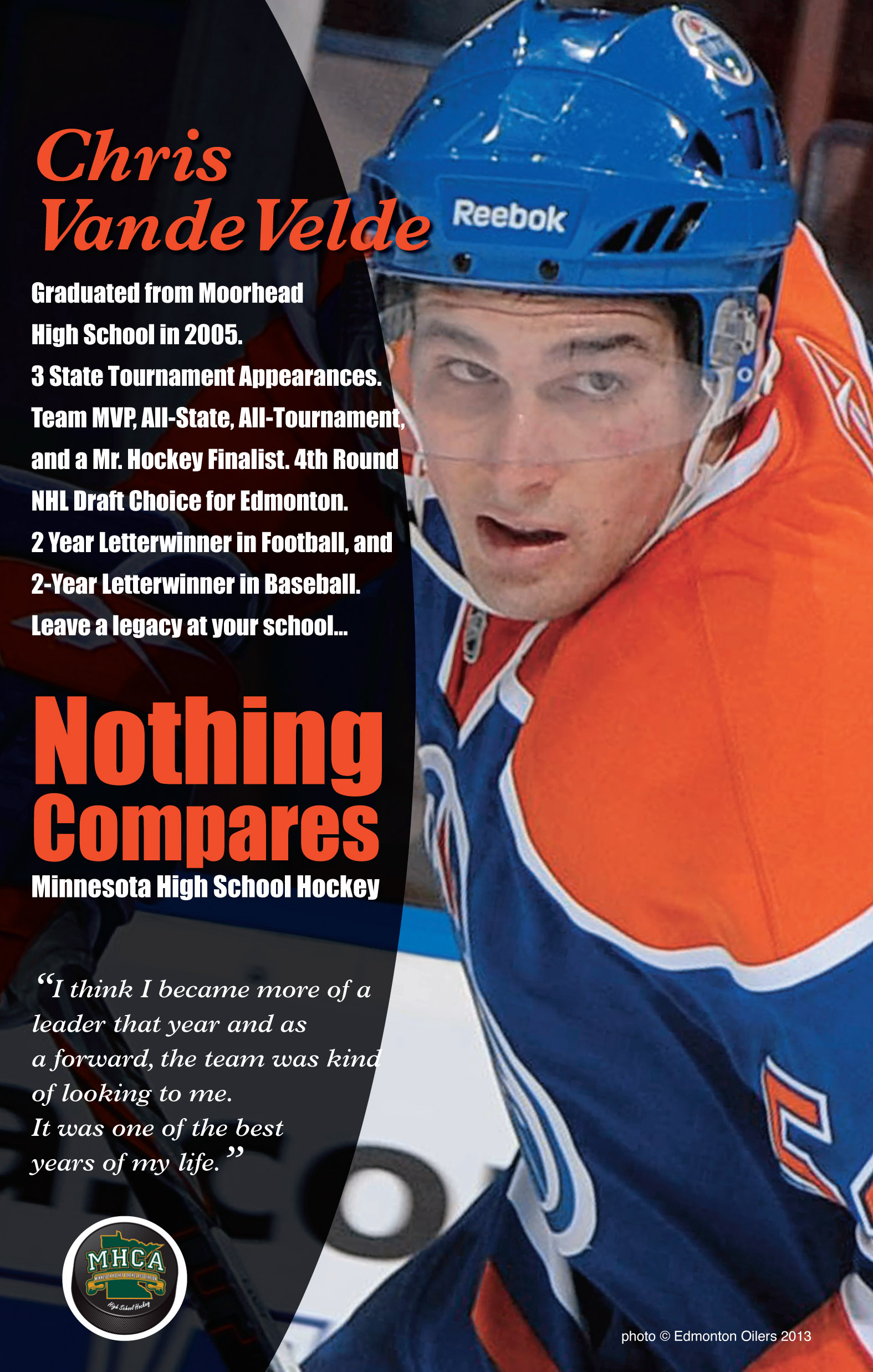 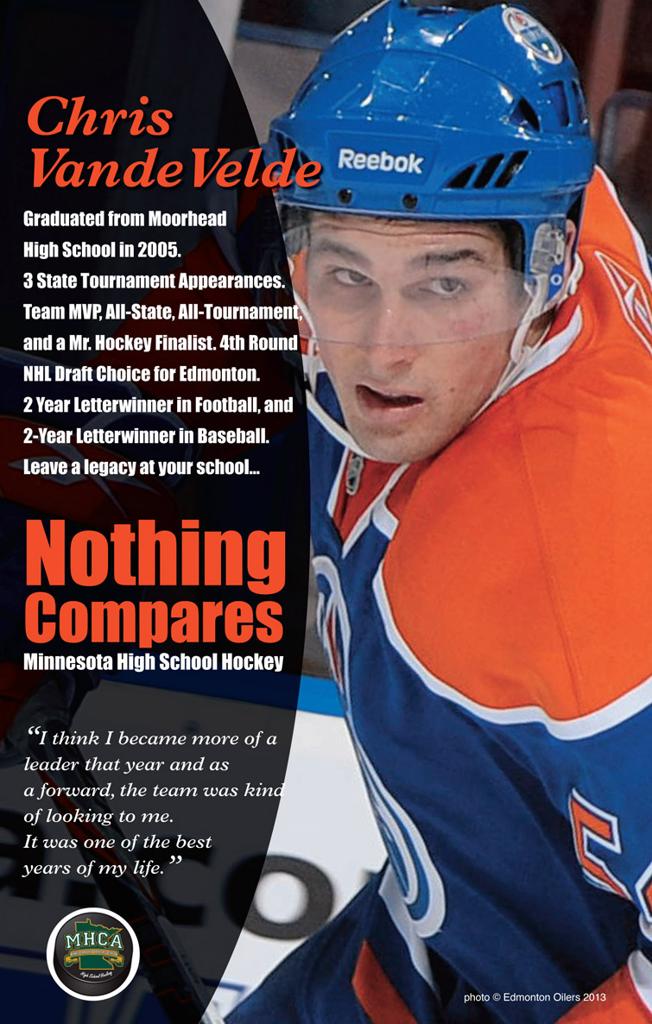