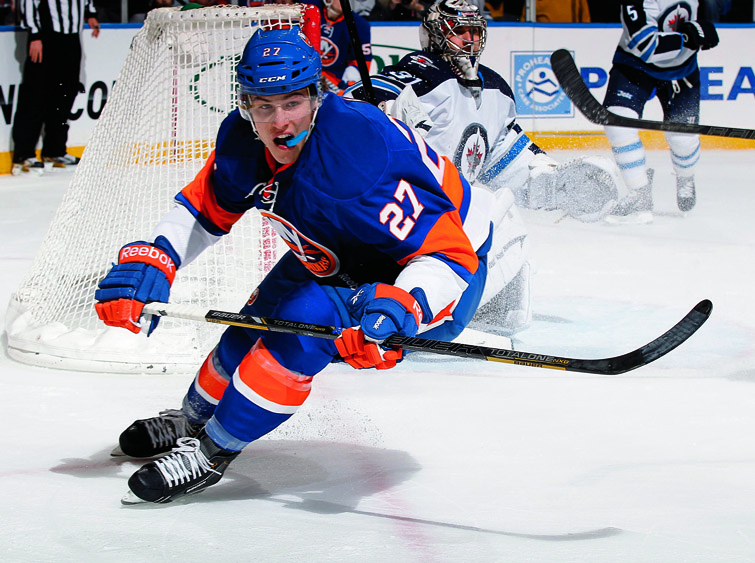 Anders Lee of Edina scored a goal for the New York Islanders in his first NHL game last season.

Lee was just a rookie. He had never skated in a National Hockey League game before, never even taken a shot while wearing a New York Islanders sweater. He was just another young kid playing hockey, this one a highly-regarded three-sport athlete from Edina High School (who might have had the talent to be an NFL quarterback).

He wasn't expecting a goal on his first shot at the NHL level.

But with just under four minutes to go in the opening period of that game, Lee picked up the puck just in front of the blue line, slapping it briefly off the boards to maintain control as a Winnipeg Jets defender poked at his stick.

Lee crossed into the offensive zone, his 6-foot-2, 225-pound frame still getting harassed by a Jets defender on the backside, and looked up to see one more Winnipeg shirt in the shooting lane. As soon as the puck settled, the lefty went for it, flicking a quick wrist shot towards the net and right past an unsuspecting Pavelec.

One NHL shot, one NHL goal.

“I was probably just trying to get rid of it, because you can't hold on to the puck too long at that level,” he said a few months later. “I mean, somehow I got all of it. It just kind of left my stick and next thing I knew I saw it in the back [in the net].”

He was surprised, he said. But maybe he shouldn't have been. Look at the 23-year-old's hockey history, and you'll see a forward who seems to have a knack for scoring, even back in high school.

“He's a big strong kid, and he's determined to score goals,” said Curt Giles, Lee's high school coach at Edina. “He's always scored goals the entire time coming up, and that just hasn't changed for him. He's one of those kids that he goes into those areas where things happen. They're traffic areas, and they're some areas that are not enjoyable areas to go to. There's big strong defenseman he plays against, and usually a back-checking forward he plays against in those traffic areas, but he's willing to go in those areas where it's tough treading.”

Lee grew up in Edina, playing Pee Wees and Squirts with kids who would end up on his high school teams years later. But in eighth grade, Lee switched over to St. Thomas Academy. He made the Cadets varsity squad that season and later tallied 54 points during a sophomore season that ended with a third-place finish at the state Class 1A tournament.

After that it was back to Edina, a program with a long, storied hockey history. With that, of course, comes expectations, maybe even pressure.

“I grew up playing in Edina hockey and understood that [history] and always went to their games and idolized those guys at the high school level,” Lee said. “So playing for Curt Giles and Dave Terwilliger, and all those guys that have established such a good program throughout the years, it was quite an honor to be on that team and to play for Edina.”

Marshall Everson was one face Lee was previously familiar with, having played together in Pee Wees and Squirts before Lee left for St. Thomas Academy. When Everson heard Lee was coming back, he thought it pushed their Hornets squad to an elite level; that they could be one of the top two or three teams in the entire state because of what Lee brought to an already talented bunch.

“We were excited. I was really excited, because he added so much depth to our team. Any time you get a guy, that quality of a hockey player, it's just going to help you,” Everson said. “[He did] everything. And I think you saw it throughout that whole junior year especially. He would play anywhere from wing to center. He could play defensively, which was important especially in our system. ... Offensively he was a superstar, too. He had such a well-rounded game along with being a prolific scorer, and you can't have enough of those guys.”

Giles had an idea of the player he was getting, too.

“His reputation did precede him a little bit,” he said. “Especially with the kids that he grew up with. They knew him real well, knew he was a very good hockey player, so I heard his reputation before he got to the high school.”
Everson remembers a game against Wayzata where Lee simply dazzled, a single-play demonstration of all the talents that made him such a weapon for two years in the kelly green and white.

“He got a pass in the neutral zone and went and split the D,” Everson said. “And almost any other guy in the state would have been knocked over by the contact that he took above the blue line from the defenseman. He kind of slipped through, and he still just had one hand on the puck, and he was able to put a move on the goalie. The goalie bit so hard, he put it right into an empty net. But there was so much going on, he ended up running into the net at the same time. It was kind of one of those things where you saw it, and you could tell the level he'd be able to play at one day.”

Lee made an instant impact as a junior. Edina went 28-3-0 his first year back, and Lee helped will the Hornets into the state tournament with what Giles remembers as a dominating performance against Burnsville in the Section 2AA finals. Lee scored on a penalty shot and set up the game-winning goal in a 5-4 victory.

“He just kind of took over that game,” Giles said. “He really just asserted himself and was determined to make sure we had an opportunity to go to the state tournament. That game, I remember one of many games that he was really dominant in. But that game really sticks in my mind very well, just due to the fact that he really had a determining factor in all aspects of that game, to get us to the state tournament.”

Edina finished second in the Class 2A state tournament, reaching the finals for the first time in a decade. But Lee said that Burnsville game was one memory that stands out above the rest.

“Both schools' [fans] were both there, Mariucci was filled,” he said. “I just remember afterward we all climbed the boards and were cheering with our fans. It was the kids you grew up with ... to share that moment with the school and the boys on the ice, it was pretty awesome.”

The following year, Edina once again made the state tournament. It ended with the consolation title, but Lee continued to demonstrate what made him such an effective player. Everson and Giles watched as Lee sliced through opponents for a staggering 84 points in just 31 games – earning him a Mr. Hockey finalist nomination and plenty more accolades. That summer, he was drafted in the sixth round, 152nd overall by the New York Islanders.

“He's one of the best high school players I've seen,” said Giles, who this winter enters his 15th season as Edina's head coach. “I mean in all aspects. His physical strength, his determination, how smart he is away from the puck, how dedicated he is to the team. He's a great teammate, a great leader. He's just a really, really good guy. He's one of those guys you're proud to say is part of your hockey team.”

After a year in the USHL (where he was the Gambler's leading scorer) and three more with the Fighting Irish, Lee is at about as high a level as he can attain. Days after scoring his first NHL goal on April 2, Lee followed it up with his first-ever pro assist -- and it ended up being on the game-winning goal in a 4-2 victory over Tampa Bay.

He didn't do himself any favors with his quick offensive success. It can only go downhill from a 100 percent conversion rate on shot attempts.
“Yeah, I don't know if it necessarily helped me in that regard,” he said, laughing.

Lee didn't play at all the rest of the season though, and entered training camp for the 2013-14 campaign knowing he's no shoe-in to make the squad.
“Just go in there and play my game, try to have the best camp possible and go from there,” he said of his mindset. “It's not going to be easy to make the team. It's going to be a difficult road. But all I can do is control how I play, control my effort level, and go from there.”

If his long history of scoring goals continues, making it in the NHL shouldn't be too much of a problem. 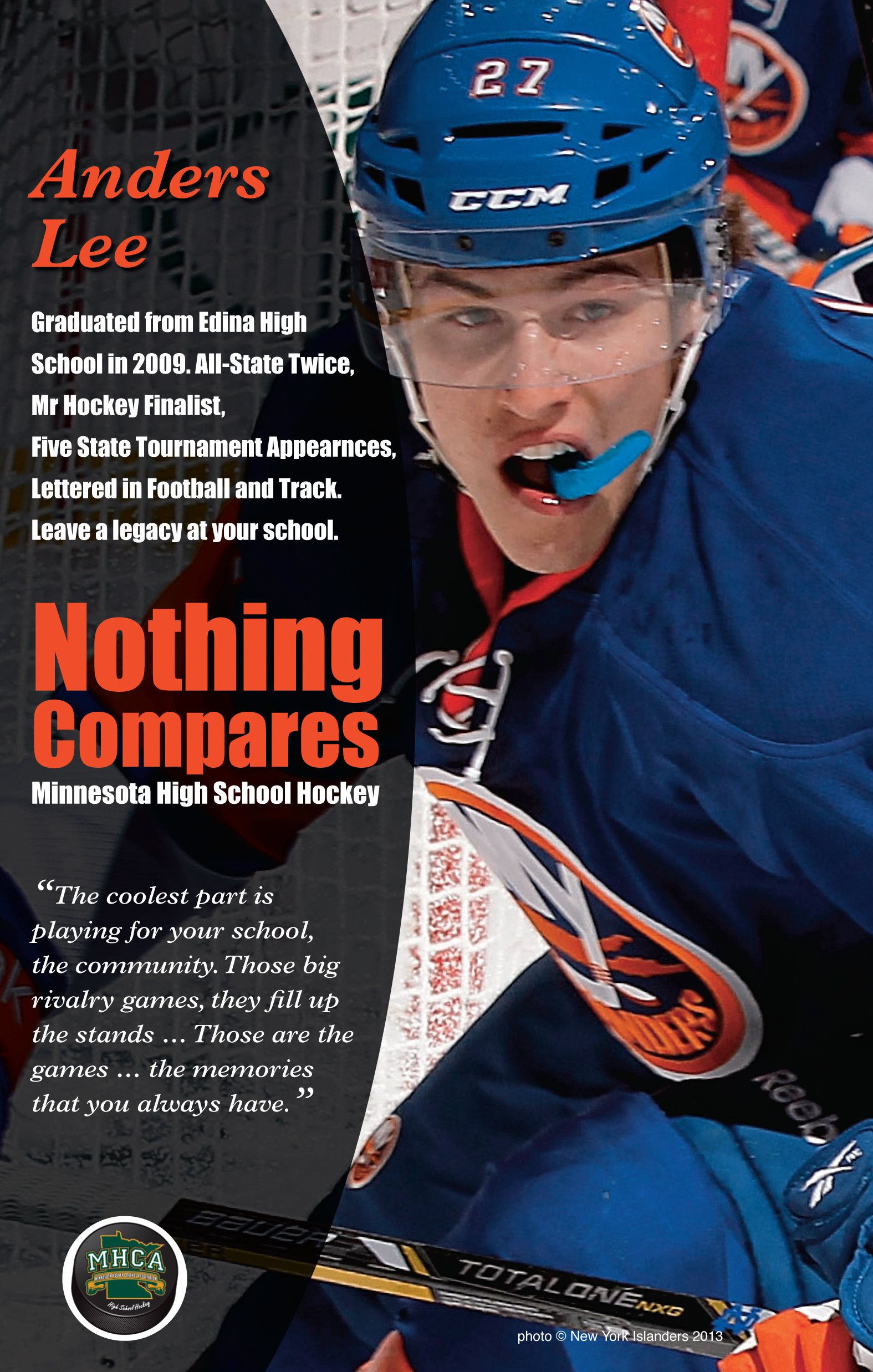 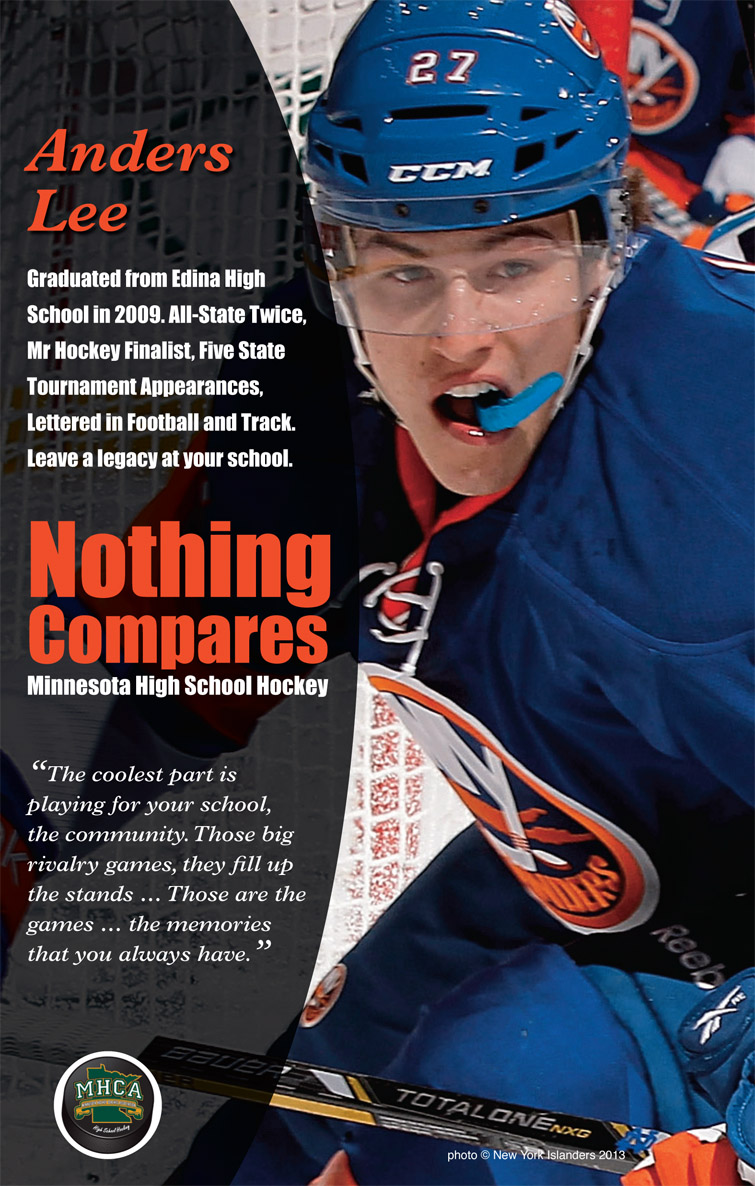