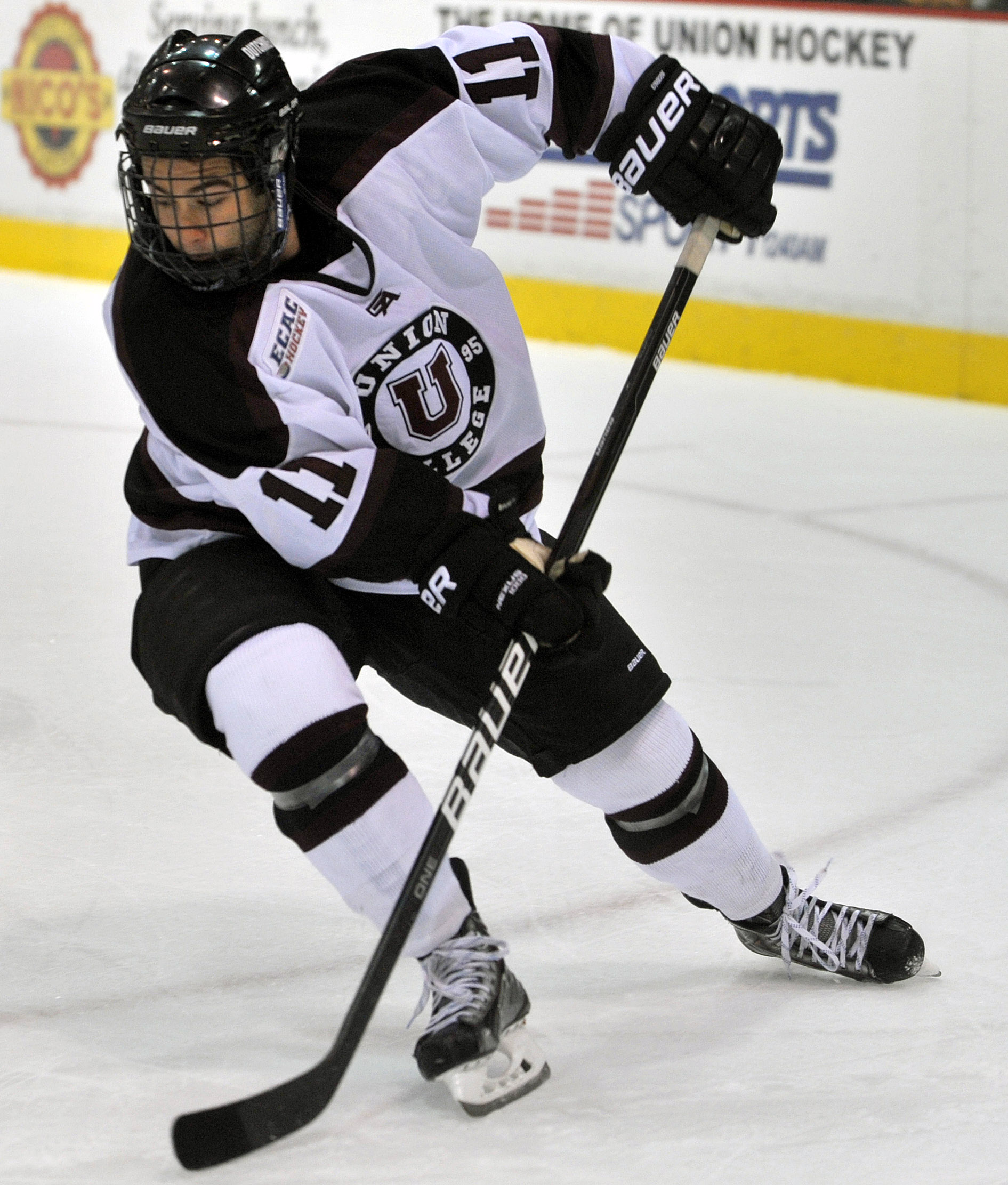 Much like the Union College hockey program, Sam Coatta burst from the shadow of bigger, flashier players to win the NCAA national championship last season.

The shadow was first cast on Coatta in Minnetonka as he skated alongside Jake Gardiner, now of the Toronto Maple Leafs, and a swath of Division I recruits in the grade below him.

“Sam was kind of the underrated guy on a team with Gardiner, (Andrew) Prochno, (Justin) Holl and (Troy) Hesketh,” Minnetonka coach Brian Urick said regarding the 5-foot-9 forward. “The big thing he had to work on is that he was small in stature. When he was a freshman (in high school) he was so much smaller than the guys he was playing against.

"It took him some time to catch up with the players around him, but he deserved the national championship as much or more than anyone else.”

According to Urick, what Coatta lacked in size, he more than made up for in intangible qualities.

“He was captain his junior and senior year and a really mature kid,” he said. “Always hardworking, respectful and put the team in front of himself – it was like having another coach in the locker room. His maturity and understanding of the game is the thing that I will always remember.”

High school teammate Jake Thornberg said Coatta always was the hardest worker on the ice and a leader in the locker room.

“He was a great role model for the younger people on the team,” Thornberg said. “He knew how to have a good time but led by example and cracked down when it was time to work.”

Thornberg recalls Coatta’s junior year, before the section playoffs, when the Skippers decided to cut their hair into mullets and bleach them blonde. Coatta had some of the longest, darkest hair on the team, and although he was proud of the well-earned flow he was the first to step up and have it cut.

“He ended up with the most disgusting mullet I’ve ever seen,” Thornberg said.

Like many Minnesotans, Coatta began skating as soon as he could walk on a backyard rink made by his father, John. The 24-year-old Sam said hockey has always been a huge part of his life and feels lucky to have grown up Minnesota.

“My roots go deep as far as Minnetonka goes,” he said. “Just ask my teammates here – they’ll tell you that. I was very fortunate to grow up in a place like I did, and to have the support of family and friends in the area means a lot to me.”

Coatta was third on Minnetonka's all-time scoring list with 135 points when he graduated in 2009. Four years later, he was bumped down to fourth after his younger brother Max topped the list with 187. There is too big of an age gap between the Coatta brothers for them to have ever played organized hockey together, but they share a close relationship and a knack for getting on the score sheet.

“I would have loved to play with Max at any of these levels of hockey,” Sam said. “We have an awesome relationship, and it really continues to grow each year. I'm closer with him than anybody else, and I don't take that for granted. I always look forward to working out, training and hanging with him in the summers. And who knows, maybe we will meet up down the road”

“Their parents did a great job – they’re both the kind of kids that you hope your kids end up like,” he said.

However, while Max is a true goal scorer, Sam is more of a playmaker, usually looking to dish first and playing all three zones responsibly. After high school, Coatta played in the United States Hockey League for the Sioux Falls Stampede, posting 56 points over two seasons.

“My USHL career was great, and I can’t thank Kevin Hartzell, Andy Jones and Kevin Ziegler enough for that experience,” he said. “My second year we made it to the conference championship, which was a ton of fun.”

Later, Coatta earned a spot in the Union lineup, contributing 10 goals and 12 assists over his first three seasons. His highlights include scoring a game-winner on the road against a 14th ranked Yale team, winning 10 faceoffs in a win over St. Lawrence and blocking 22 shots in 40 games his junior year.

“I never thought that Union would be a powerhouse like they were,” Urick said. “They’ve done a great job recruiting and everything else. I could definitely see Sam as a national champion because of his character and stature, but I never pictured Union winning.”

With the shadow lifted, Coatta, now an alternate captain, began the 2014-15 season with two goals (one shorthanded) and an assist to lead Union to a 2-0 start.

“Right now I'm obviously focused on my senior season,” he said. “I want to get better every day and have options to further pursue my playing career following graduation. I love the game, and I'm looking forward to playing as long as I can.”