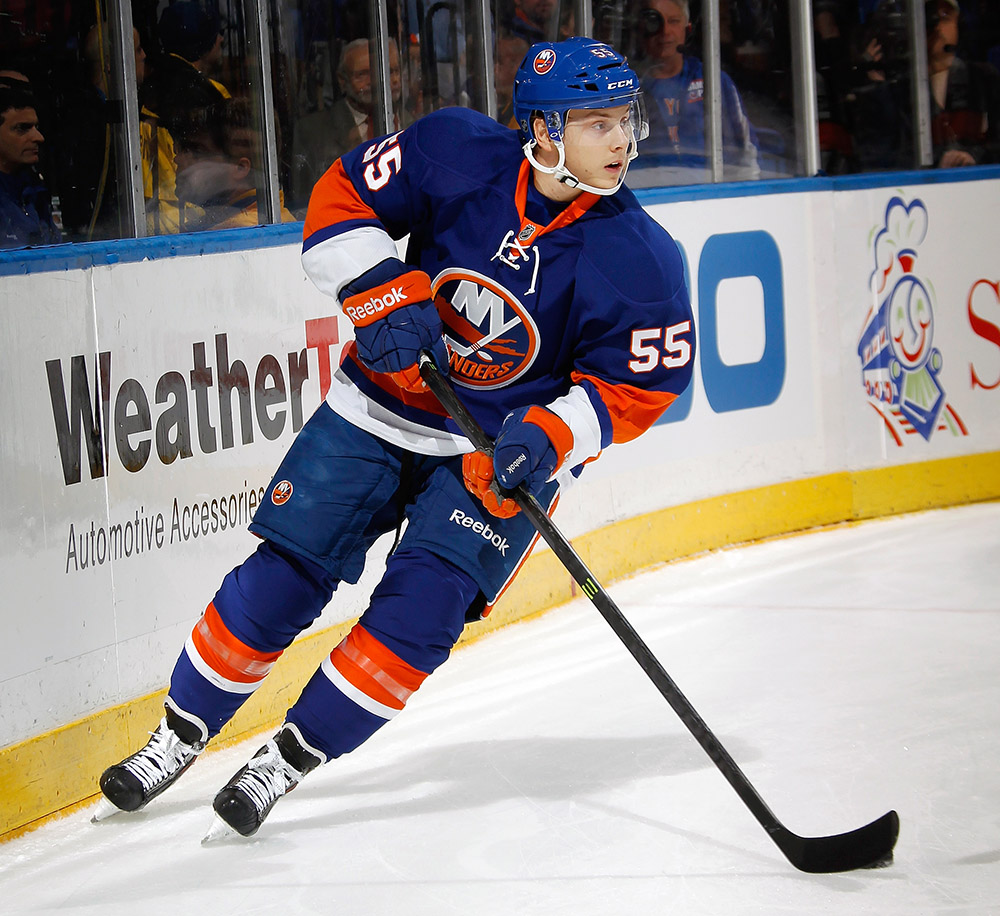 Aaron Ness has played in 29 NHL games for the New York Islanders.

Bridgeport Sound Tigers captain Aaron Ness stepped on a sheet of ice for the first time when he was three years old and decided he wanted nothing to do with hockey or skating.

Fortunately, especially for those in Roseau, Minn., Ness laced up his skates the next year and changed his mind.

“He wanted to try skating because he watched me play with the old-timers,” Aaron’s father and former University of North Dakota defensemen Jay Ness said. “He wanted to try again and he just took off. Within five minutes there was no chair, no holding him, nothing. He took to it like a duck floating on water.”

Such has been the learning curve for Ness, who doubled his class load during his junior year at Roseau High School so he could graduate early.

“He’s an extremely hard worker, always has been,” Jay Ness said. “That’s a big part of his success. He’s a real student of the game, his hockey IQ is real high – of course I’m his dad and I would think that.”

“He had tremendous skating and quickness, and then you throw on top of that a very high hockey IQ,” Oliver said. “He just read every situation and anticipated the play and the game so well. He would step on the ice and he could slow the game down or speed the game up.”

Jay said he could tell Aaron would be successful in hockey when he was a Bantam and started pulling away from the rest of the players. Oliver claims Aaron was not only the best player at his position, but the best player in the state.

“I remember a game against St. Cloud when the arena was full of scouts – college, NHL, juniors – just full of them,” Oliver said. “We were a man short and Aaron got the puck and took it all the way down, skated two full circles around their zone and ended up scoring. He had his head up the whole time and waited and waited, but the other team couldn’t angle him and couldn’t catch him so he cut to the net and scored.”

Ness’s combination of skill and poise lead the Rams to a Class 2A state championship in 2007 when he was a sophomore – a feat that did not go unnoticed by the 2,600 residents of Roseau.

“On our way home, for nearly 30 miles before town, there were cars lined up at intersections and as the bus went by they pulled in behind and followed the team into town,” Oliver said. “There was a line of cars as long as I could see.”

The next year, after scoring 72 points (28 goals and 44 assists), Ness took the Mr. Hockey and Associated Press Player of the Year awards home despite an early exit from the state tournament. Again, the little town of Roseau paid tribute and declared March 17-21 “Aaron Ness Week.”

“That was pretty cool for them to do that,” Ness, 24, said. “I don’t know if much happens anymore, it might just have been that one year. I’ve been busy out east the last couple years and haven’t been able to make it back as much as I’d like to.”

Jay said that “Aaron Ness Week” has dwindled, but lives on through a little ink in the newspaper every March.

During his Mr. Hockey award-winning season, Ness was juggling his junior and senior year class loads.

“What more was he going to accomplish in high school? He won a state title, won Mr. Hockey and put up more than 60 points in his junior year as a defensemen,” Oliver said.

Despite his father’s past at UND, Ness committed to the University of Minnesota in 2008.

“He gave me a hard time about it, but it was funny because he helped me with the decision process and he was always supportive and knew I was making the best choice for me,” Aaron said. “At that time Minnesota was the right fit. They were putting out a lot of NHLers and a lot of defensemen. The facilities were second-to-none, there was a great coaching staff, trainers – from top to bottom it just felt right.”

Ness was selected 40th overall in the 2008 NHL Entry Draft by the New York Islanders, and after three years and 43 points (6 goals, 37 assists) with the Gophers, joined the Bridgeport Sound Tigers of the American Hockey League.

“The draft process was pretty crazy, you go to the combine and do the interviews and do the physicals -- it gets to be pretty taxing, but when the draft comes you just wait for your name to get called,” he said. “Luckily, I didn’t have to wait too long. My parents were with me at the draft so we got to share that moment together.”

Ness, in his fifth season with the Sound Tigers, leads the team’s defensemen in points (23) and assists (17). The 5-foot-10 defensemen was recently picked to play in the AHL's All-Star Game. He has played in 29 NHL games, and although he hasn’t found a permanent spot among the Minnesota-laden Islanders, Ness said he enjoys life on the East Coast.

”It’s a different lifestyle out here, from the weather to the people, but it’s been good so far,” he said. “I’ve been lucky enough to be on some good teams and meet some good people. Hopefully, sooner rather than later, I can make that next step.”