Chris Anderson’s hockey coaching career began through a chance meeting in a supermarket.

Now, 10 years later, the former White Bear Lake High School hockey standout and current assistant coach for his alma mater draws from his hockey experience to resonate with his players.

Anderson’s youth hockey path was similar to that of most young Minnesota players. He learned to play on outdoor rinks near his house, progressed through the youth ranks and eventually starred for White Bear Lake’s high school team from 2000-2003. Anderson played in two Minnesota state hockey tournaments, describing the event as, “probably the best tradition in all of Minnesota,” and captained the Bears during his senior campaign.

While Anderson’s career had all the earmarks of many top Minnesota high school hockey players, he possessed a competitiveness and drive that was uncommon even among the best players.

“His intensity (was his greatest strength),” said White Bear Lake head coach Tim Sager, who was Anderson’s coach in high school and welcomed his former player to his staff in 2008. “Chris hated to lose more than he liked to win. Every day he wanted to get better.

“Some guys will come to the rink and go through the motions, but he worked every single day, and that’s what made him so successful. You can see that now with the way he coaches and what he wants out of our players.” 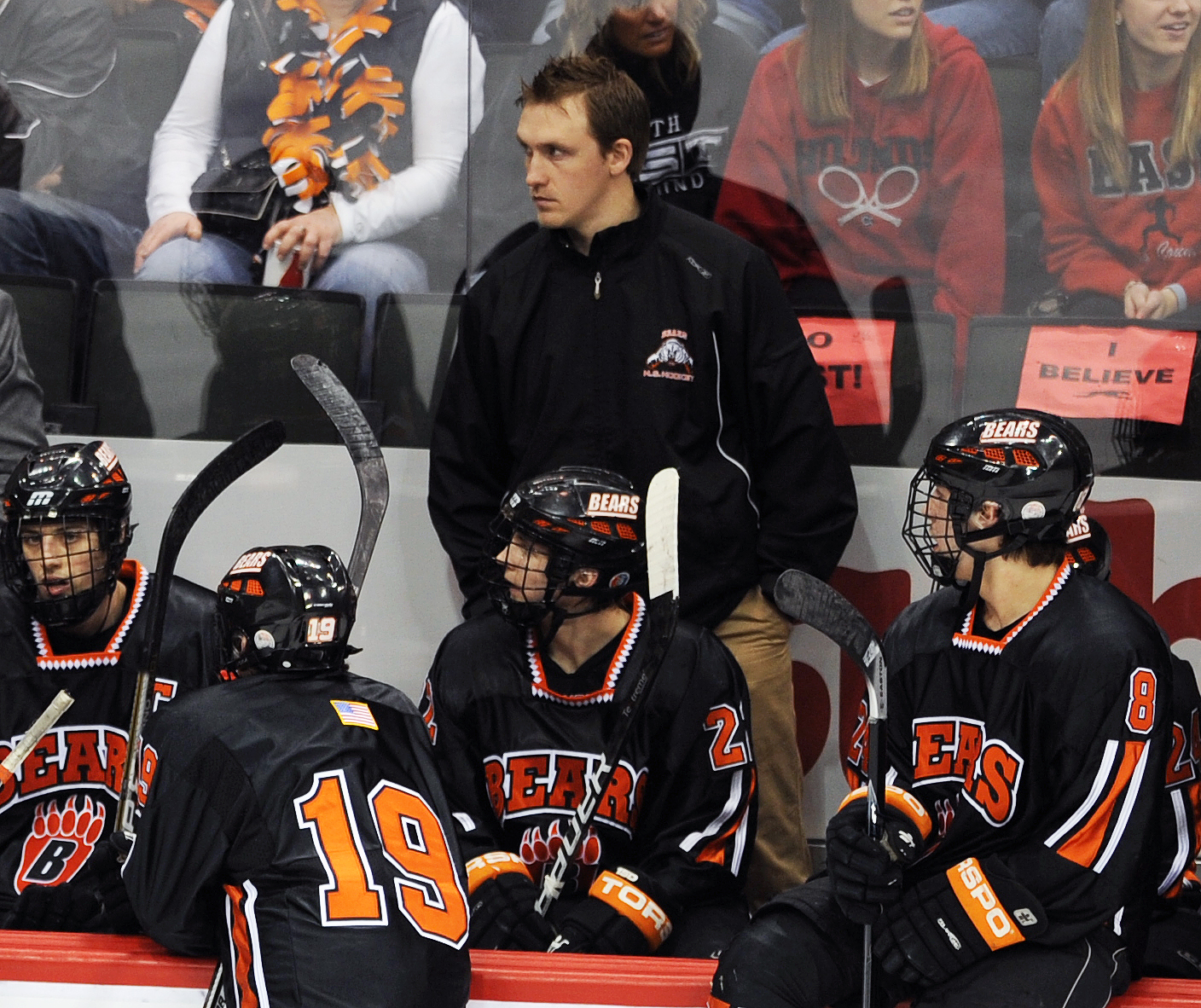 White Bear Lake's Chris Anderson was named the Class 2A assistant coach of the year by the Minnesota Hockey Coaches Association following the 2010-11 season.

That work ethic eventually lead Anderson to earn a spot on St. Cloud State University’s Division I hockey team. Anderson skated for the Huskies from 2004 through 2008, when he learned how to embrace his role on the team – a lesson he now relays to his players.

Anderson’s niche happened to be shutting down the opposing team’s top players.

“Even in high school, obviously, I wanted to get points, but I felt better about my game if I played against other teams’ top players and frustrated them,” Anderson said. “To be relied on by a coaching staff to shut down another team’s top player was very gratifying or fulfilling to me.”

Following a successful college career and graduation in 2008, Anderson was in search of work. The economy was still reeling from a financial crisis, and he didn’t find a job right away. Hoping to help fill some of his son’s free time, Anderson’s father stepped in.

“My dad actually ran into Coach Sager at the grocery store,” Anderson said.“By this time, it was like Thanksgiving time. I never had expressed it to my dad, but he told Coach Sager that I was interested in coaching.

“So, then my Dad got home and said he ran into coach Sager at the grocery store and that I should call and see if I could be a volunteer coach. He kind of played both sides.”

Following the call, Anderson served as a volunteer coach in his first season. The following year (2008-09) he became the varsity assistant coach and has held the role ever since.

“I feel like at the start it can be kind of intimidating in front of 30 to 40 high school kids and expecting them to listen to you,” Anderson said. “So becoming more confident in who I am as a coach is the biggest improvement. … I feel like I’ve been pretty lucky to have good coaches that have shaped what my coaching style is now.”

Anderson still quotes his former coaches from time to time, and he has used their coaching styles and philosophy to help mold his coaching identity.

Sager, who repeatedly tells Anderson he doesn’t still have to refer to him as “coach,” has observed dramatic improvement in his former player’s coaching.

“Chris could be a head coach if he wanted to,” Sager said. “I trust him with our defensive coverage and he does a lot of our drills. He’s just a brilliant mind and a calming factor. There’s a lot of guys that are screamers and yellers, but he’s not one. There’s just an expectation [from him] to play as hard as you can and to get better.”

Anderson’s defensive schemes and philosophies have paid dividends for the Bears. Through its first 10 games this season White Bear Lake held the No. 1 ranking in team defense in all of Minnesota, surrendering just 1.20 goals per game. As a result, the Bears (8-0-2) were ranked No. 5 among the state’s largest schools, and were just one of three remaining undefeated teams in the state heading into a Jan. 5 matchup against No. 3-ranked Edina.

Opposing coaches around the state have also taken notice of the job both Anderson and Sager do in putting together a formidable team year in and year out. Anderson was named the Class 2A assistant coach of the year by the Minnesota Hockey Coaches Association following the 2010-11 season.

“Its an excellent program from top to bottom, and we’ve been impressed with them every year,” said Randolph, in his 29th season coaching the Greyhounds. “That’s why they’re on our schedule. … They’re always one of the best teams in their section, which we like, and consistently we’ve always had excellent games.

"We usually play (White Bear Lake) right at the beginning of the year, and that’s a nice way to let the kids know how competitive games are going to be throughout the season.”

Through the years, Anderson has embraced more and more responsibility as a coach. The Bears' power play is still run by Sager, who Anderson called a, “power play savant,” but Anderson has his fingerprints on most everything else involving the team. With that has come the duty of having difficult conversations with players – a skill that playing hockey doesn’t teach.

These conversations include telling players they have been cut from the program and speaking to a team that didn’t achieve its ultimate goal of playing in or winning a state championship.

“The hardest part about coaching that no one ever teaches you is how to cut guys or tell them they aren’t going to be a part of the program. …” Anderson said. “The other challenge is at the end of the year, if things didn’t go your way, how does a coach talk to a team after putting in all that energy all year, and then boom it’s over.”

To Anderson, these questions are best answered by using perspective on hockey and on life.

“Both coach Sager and I have a lot of life experiences that we can relate to, and the clock is still going to tick, the sun’s going to come out, so what are you going to do tomorrow to make yourself a better person?” Anderson said. “At the end of the day, not everyone is going to make the team, you’re not always going to get the job that you want or the grade that you want, but life doesn’t owe you anything. You make it what it is, and if something doesn’t go your way, how do you respond to it?”

Anderson’s style resonates with his players. His hockey pedigree and insight help as well.

Wyatt Newpower played for Anderson from 2012-16 and is now a sophomore on the University of Connecticut hockey team. Newpower expressed respect and gratitude toward him.

“The overall effort he put in to help me grow as a player is something I’m incredibly thankful for and that’s potentially one-of-a-kind,” Newpower said. “I don’t know if you can find that anywhere else. I still talk to him two to three times a week. Just asking questions about battling adversity in college. He’s still one of my biggest supporters.”

Looking ahead, Anderson isn’t sure what the future holds for his coaching career. He currently works as a Regional Account Manager for SportsEngine, and he recently started a family.

For now, he’s perfectly content with his role and often surprised by the attention his coaching endeavors garner around the office.

“As long as I have support at home and support at work, I feel like I can do it for at least a few more years and see where it goes,” Anderson said. “The people I work with are very supportive and are almost more interested in (my coaching) sometimes than I thought they ever would be.

“They kind of celebrate the wins and stay away from me after the losses.”

Following his collegiate hockey career and graduation from St. Cloud State University in 2008 with a degree in entrepreneurial and small business operations, Anderson began his professional career as a Sales Representative with the Deluxe Corporation in 2009. He then worked for two years as an Account Executive for the ABILITY Network before accepting a role at SportsEngine as a Regional Sales Manager. Anderson is heavily involved in hockey as an assistant coach for the White Bear Lake high school hockey team. He’s currently in his 10th season as a coach for the Bears after reuniting with his high school coach Tim Sager in the 2008-09 season. Under Anderson, White Bear Lake has captured Four Suburban East Conference championships and made one state tournament appearance (2011). Anderson was named the Class 2A assistant coach of the year by the Minnesota Hockey Coaches Association following the 2010-11 season. His team currently boasts an (8-0-2) record and is ranked No. 5 in Minnesota for Class 2A schools.

Q: How do you feel your playing style has influenced your coaching style?
A: My playing style has really allowed me to coach from our net out. Defending well creates offense. Turnovers, gaps, and coverage mentally challenges opponents and ultimately creates more offensive zone time for us.

Q: What has been your proudest moment so far as a coach for the WBL high school program?
A: Moments - seeing players succeed at high levels. While I'm relatively young in my coaching career, it's always my goal to develop players to succeed at the next level. Also, seeing alumni come back and talking with them.

Q: What's the biggest lesson you've learned over the course of your coaching experience that you didn't necessarily learn as a player?
A: Coaches don't have all the answers and they are always learning and evolving. 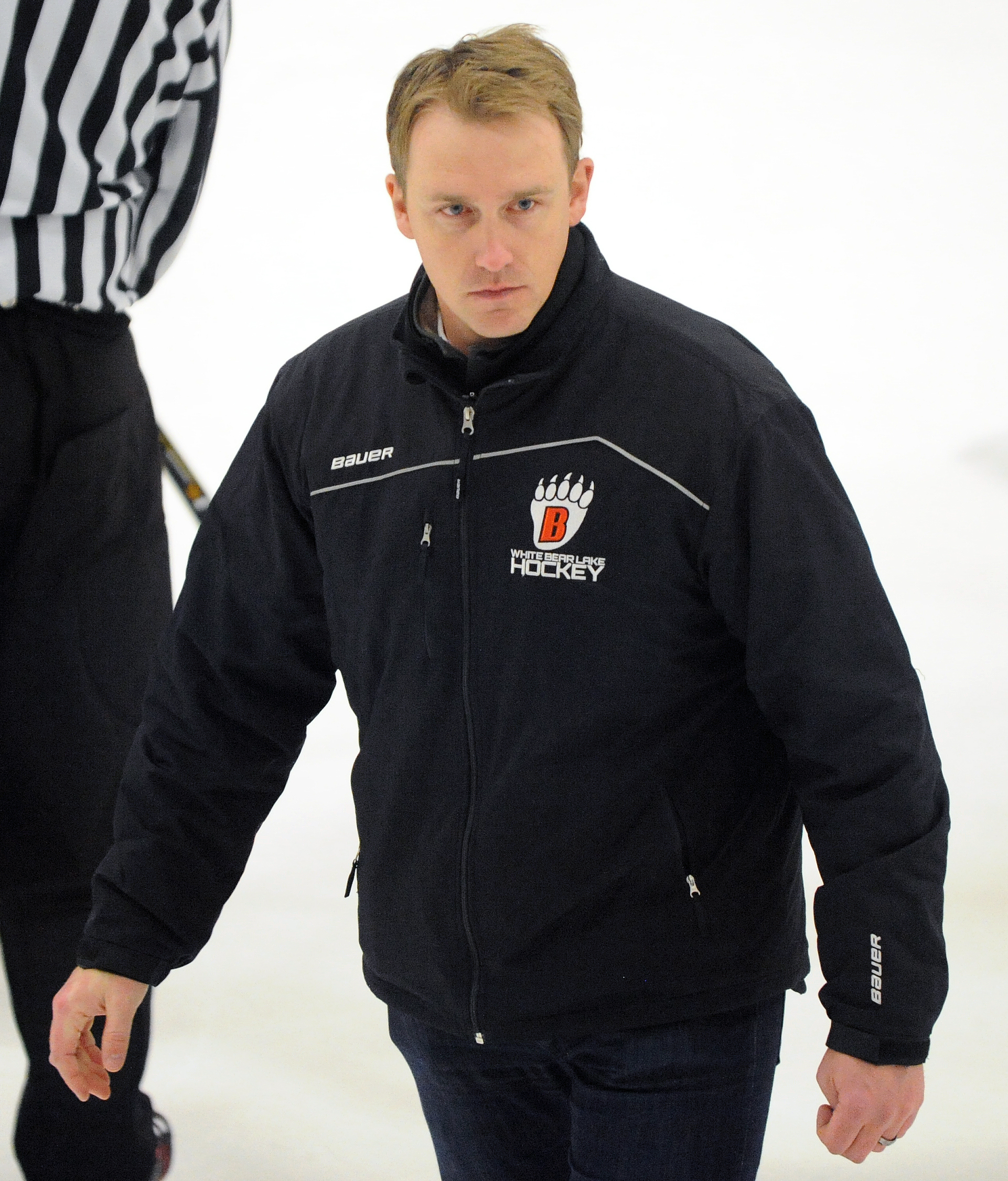