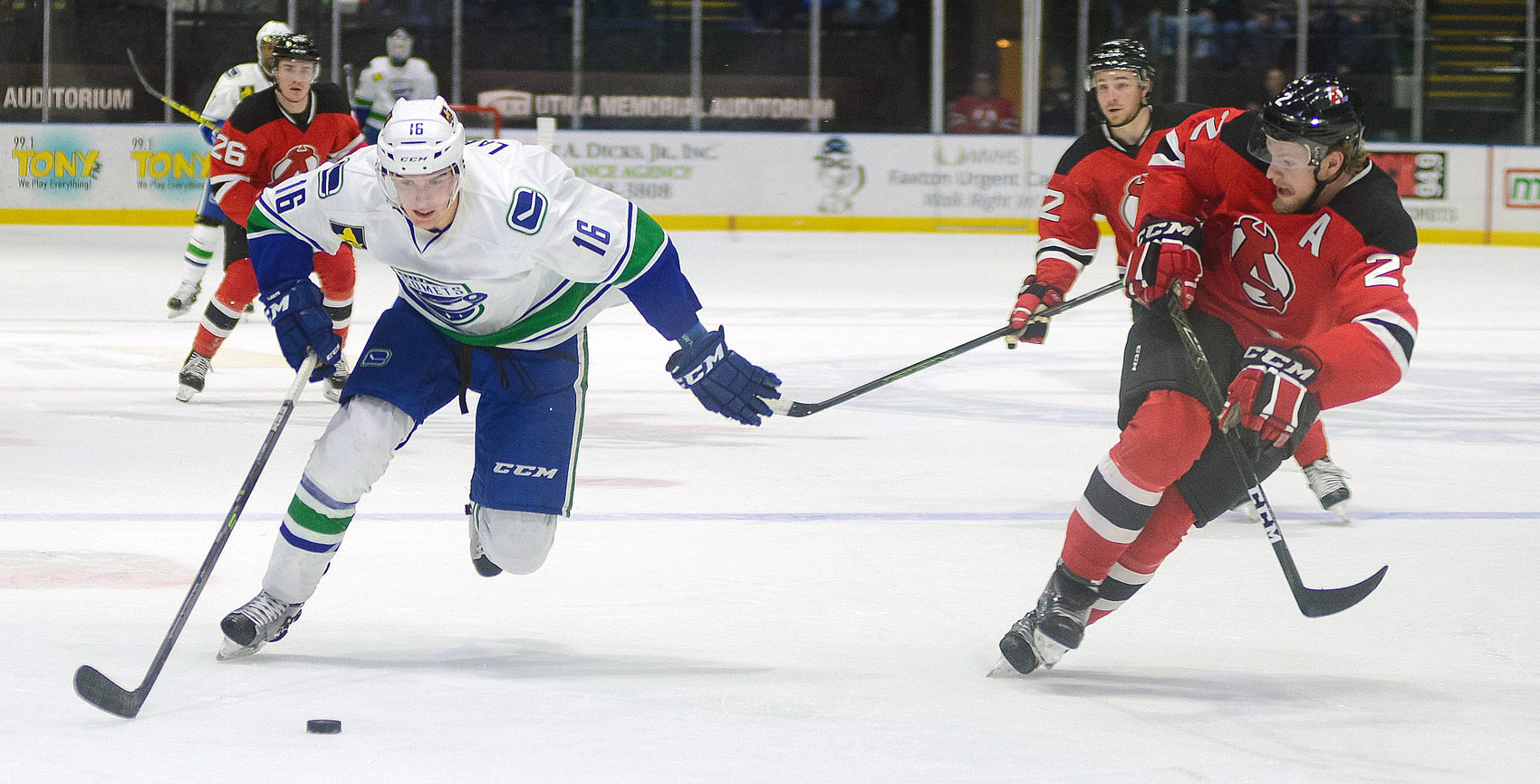 Former Academy of Holy Angels standout Joseph LaBate has been a fixture with the Utica Comets of the AHL since 2014. Photo by Lindsay Mogie

Former Academy of Holy Angels standout Joseph LaBate has used hockey as a way to connect with family and friends since he started skating as a two-year-old.

Now, as the 6-foot-4 center works to become a permanent fixture in the NHL for the Vancouver Canucks, the 23-year-old LaBate is backed by a friends, family and former teammates.

LaBate is the youngest of four siblings who grew up within walking distance of an outdoor hockey rink in Eagan, Minnesota. His brother, Peter, and sisters, Noel and Caroline, were making treks to the rink before LaBate was born.

As soon as LaBate could walk, his father, Joe Sr., introduced him to the ice. 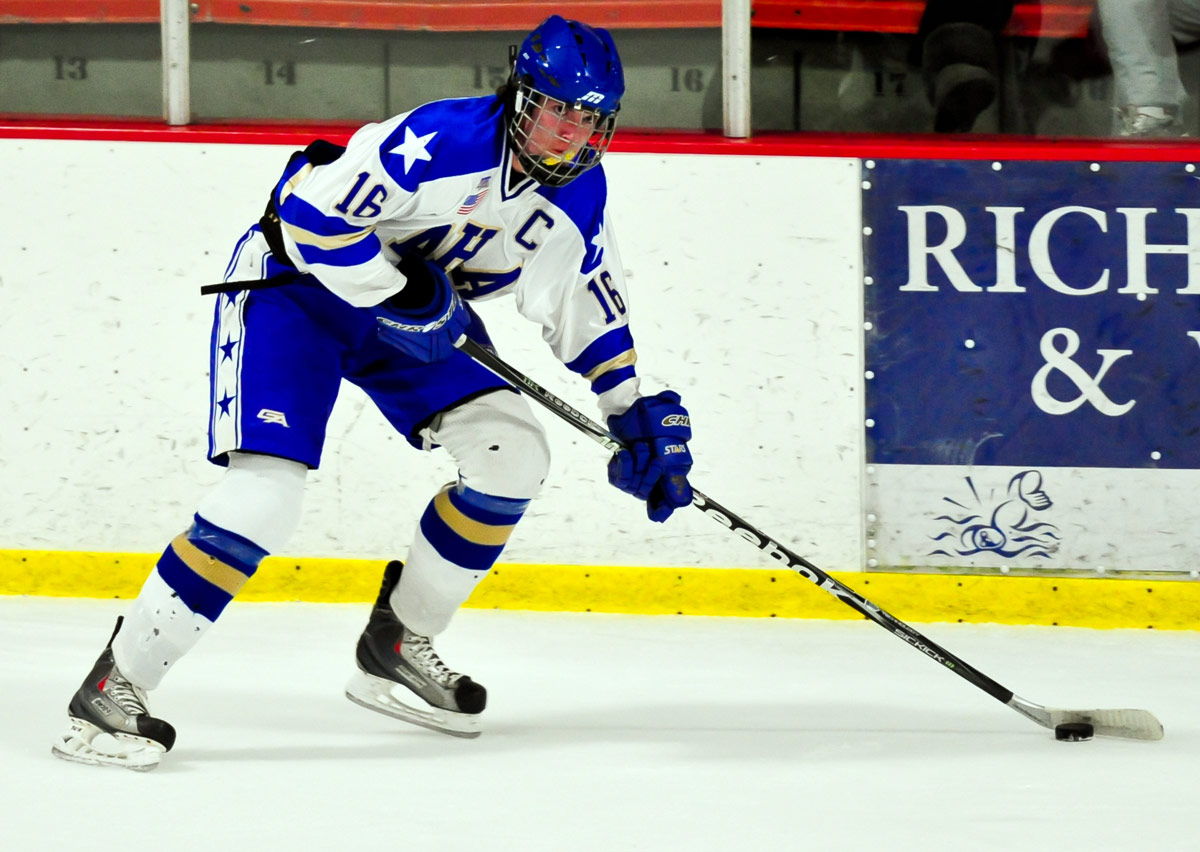 “The family skated together a lot,” Joe Sr. said. “For my wife and I, sports have always been a priority as long as it was complemented with academics. Which sport they chose was up to the kids, but we both had a huge love for hockey, and the boys really picked up on that.”

While LaBate was the last in his family to take to the ice, he quickly became a premier player in Eagan’s youth hockey scene. Joe Sr. said his son was incredibly passionate and competitive but knew how to play on a team and quickly emerged as a leader. LaBate and former University of Wisconsin teammate Cullen Hurley grew up playing youth and backyard hockey together and were constantly competing to one-up each other.

“When we were in Pee Wees I scored a hat trick one game and Joseph didn’t,” Hurley said. “I think that kind of lit a fire under him, so sure enough he scored one the next game. He just had to make sure since I had one, he did, too. He gets motivated by little things like that.”

As the friends neared middle school, it became clear LaBate was ready to advance past his age group.

“Sometime around Squirts I could tell there was just a dominance about his game – we were almost embarrassed, kind of hoping he would hold back a little bit,” Joe Sr. said. “In those years we got a sense that he might really be able to do something with this game. He had this unending request to keep playing up, and we spent a lot of time on the road finding better competition.” 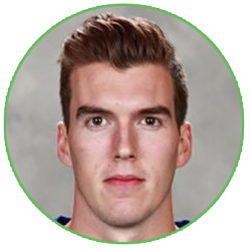 Plays for: Utica Comets of the American Hockey League, although LaBate was called up by on Feb. 25 by the Comets' parent team, the Vancouver Canucks. He's played in five games for the Canucks in his career.

NHL Draft: Selected in the fourth round (101st overall) by the Vancouver Canucks in 2011.

High school: Graduated from Academy of Holy Angels in Richfield, Minnesota, in 2011. Was a 2011 Minnesota Mr. Hockey finalist and all-conference and all-state selection.

Quote: “I wanted to play with my friends and have an extra year of being the go-to guy. In juniors you don’t know where you’ll fit in the lineup. My family and mentors told me being the go-to guy benefits a player more than going to USHL.”

LaBate’s passion for the game is painted on the walls in his garage. While other kids were watching TV or playing video games, LaBate was in the garage shooting pucks for hours at a time. Joe Sr. said the walls, the door and even his toolbox still look like they were sprayed with a machine gun.

When LaBate wasn’t torturing his garage, he was drawing up plays in Hurley’s backyard rink and deploying them at practice or at other neighborhood rinks. Although he didn’t reach full height until 2016, he studied the bigger, skilled NHL players such as Joe Thornton and David Backes and learned to use his size as a power forward. He went to camps and clinics year-round and was first line center for Academy of Holy Angels, a private school in Richfield, Minnesota, as a freshman.

LaBate said he got his first college recruitment letter as a freshman but waited until March of his senior year to commit to the University of Wisconsin.

“I just took my time with the whole process,” LaBate said. “I saw guys committing and leaving early, but I took all my official visits and found what fit me the best.”

While he weighed his college options, LaBate centered the Stars’ first line under coach Greg Trebil, recording 58 points (29 goals, 29 assists) his junior year and 49 points (27 goals, 22 assists) his senior year. Although LaBate never played in a state tournament, he went to support his friends playing on other teams every year.

LaBate had the option of joining the Waterloo Blackhawks in the United States Hockey League as a junior, which he and Hurley strongly considered until just before his senior year began.

“I had a change of heart in the middle of summer so I called the coach and told him I was staying in high school,” LaBate said. “I wanted to play with my friends and have an extra year of being the go-to guy. In juniors you don’t know where you’ll fit in the lineup. My family and mentors told me being the go-to guy benefits a player more than going to USHL.”

Hurley said the two went to a camp in Waterloo to see how they compared to other players, but they knew they weren’t going to leave Holy Angels.

“It was never really a question because we were so tight knit,” Hurley said. “We had a goal of making the state tournament, and we didn’t want to leave our teammates behind.” 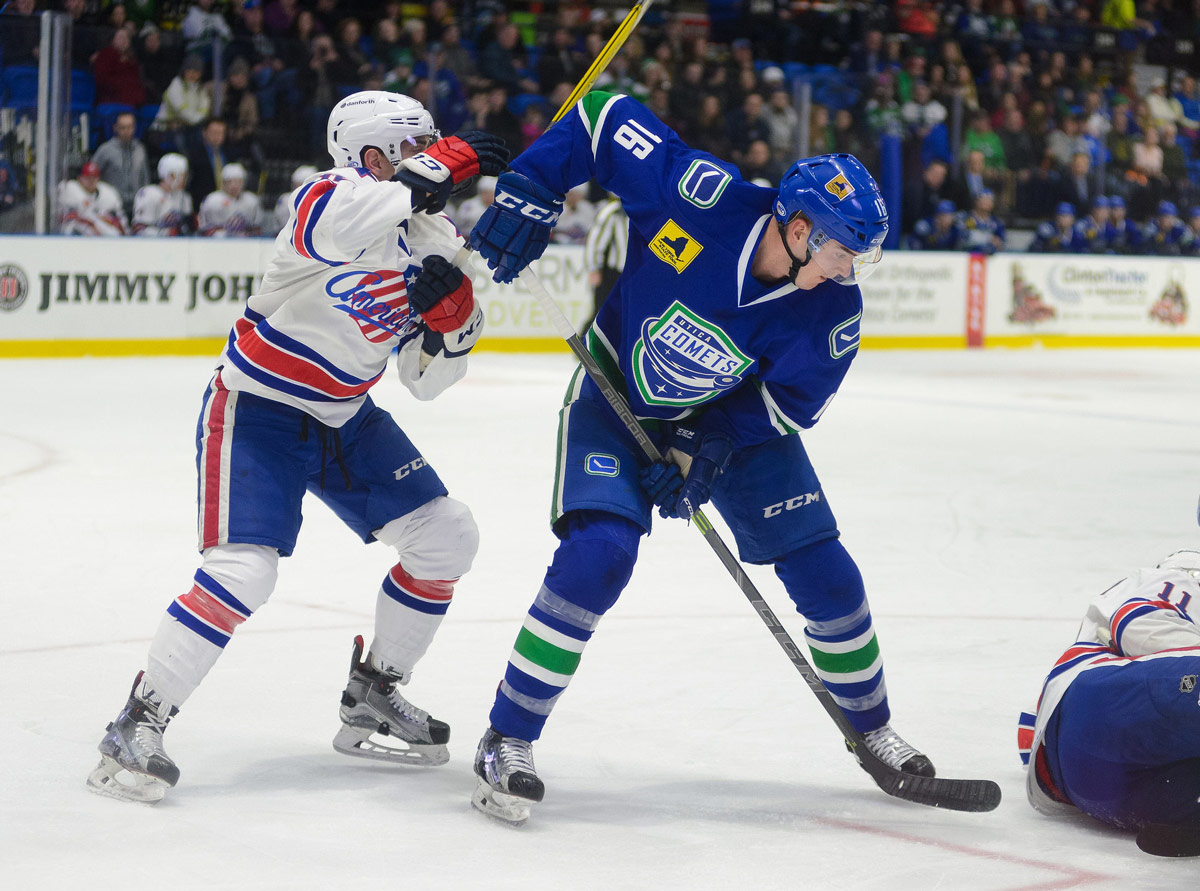 Joseph LaBate, right, scored 10 goals and added 10 assists for the Utica Comets of the American Hockey League in 2015-16. Photos by Lindsay Mogle

In the 2010-2011 season, LaBate and Hurley co-captained a 16-8-1 Holy Angels team that beat state champion Eden Prairie during the regular season and won the Schwan Cup Silver Division holiday tournament. LaBate was named a 2011 Mr. Hockey Finalist, all-conference and all-state. He was drafted 101st overall in the NHL Entry Draft by the Vancouver Canucks.

In the fall, LaBate joined Wisconsin confident he would play as a freshman, which he did. LaBate played at least 35 games all four years, recording 31 goals and 52 assists during his collegiate career. He was an assistant captain his senior year and led all seniors with six goals, 12 assists and 100 shots on net.

That same year, he was reunited with Hurley, who joined the Badgers after three years of junior hockey.

“As soon as I came in, the team already knew all about me,” Hurley said. “(Joseph) had already told stories about us growing up and in high school. They were mostly good stories – maybe a couple embarrassing ones. It was a little odd for me because I didn’t know anyone, but they already knew half my past.”

I wanted to play with my friends and have an extra year of being the go-to guy. In juniors you don’t know where you’ll fit in the lineup. My family and mentors told me being the go-to guy benefits a player more than going to USHL.

In 2014 LaBate joined the Utica Comets of the American Hockey League, where he has spent most of his pro career. His first goal with the Comets came in dramatic fashion and certainly left a mark. With the Comets leading 4-1, LaBate was approached by 6-foot-7, 240-pound Philadelphia Flyers prospect Sam Morin and the two started scrapping. During the fight – with his parents watching a live-stream of the game – LaBate’s visor created a gash above his left eye. LaBate went into the locker room and received 15 stitches, only to come out for the third period and score his first professional goal.

In November 2016, Joe Sr. received a call from his son, and could tell there was tension in his voice.

“I knew something was up,” Joe Sr. said. “He told me he got called up to the big leagues and had to be on the road the next day. I tried to give him whatever advice I could and let him know how proud I was of him.”

Before his dad could finish, LaBate hung up and was already calling his mom and siblings.

LaBate played in three games for the Canucks, going scoreless with a plus-one rating. Later, in February, LaBate was called up for his fourth and fifth NHL games after five Canucks players were diagnosed with the mumps. While LaBate progresses toward his goal of becoming a mainstay player in the NHL, he hasn’t forgot the family and friends that helped him get to where he is.

Hurley said he and LaBate stay in contact with each other and their Holy Angels teammates via group text, and on New Year’s Day LaBate returned to Minnesota to skate with his family on his brother’s backyard rink.